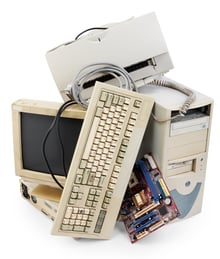 Companies across the globe depend on legacy software systems to support many of their core business functions. In fact, almost a full 70% of corporate software systems in use today are legacy applications [1].

With such a high amount of legacy software in use by firms, what does "legacy" mean anyways, and what are the implications of using such software?

In practice, the term "legacy" is used to refer to systems that are old or behind the times in terms of technology and innovation. Depending on the industry, software upgrades can quickly fall by the wayside and become easily outdated.

In today's world, information technology systems have become so integral to all business operations that downtime and crashes can prove extremely damaging.

One study by the IHS conducted in 2015 on the costs of technology downtime for mid-size to large-size companies found that downtime of servers, applications, and networks combined resulted in an average of $1 million/year lost for mid-size firms, with almost $60 million/year in costs for large enterprises [2].

If (or when) issues pop up with your legacy software, you will then need to spend valuable time addressing the issues while also losing money from the downtime itself.

Legacy software is oftentimes hard to use. The result? Your employees cannot reach their top working potential, and productivity goes down.

In fact, 23% of 2,000+ participants in a study by Deloitte described their core systems today as inflexible [3,4]. Further, 13% of study participants called the systems insufficient and unintuitive [3,4].

Outdated software can leave you open to cyber attacks. Combinations of existing flaws coming to light with new methods of attack mean older applications are unable to provide adequate security.

According to research, between 70% and 80% of the malware infiltration detected by firms could actually have been avoided if only the company software had been updated [5].

Legacy software is often kept in place due to its convenience and perceived safety - after all, if you have had no issues thus far, why wouldn't it continue? Your company can be exposed to a variety of legal and regulatory compliance risks, simply because of your legacy software systems. Due to the lack of more modern security measures as well as other potential new regulatory requirements, it is vital to keep your software updated to avoid fines by auditors.

Besides compliance risks, legacy applications pose other key challenges to firms. These challenges include a lack of many conveniences of modern applications such as improved user interfaces, increased functionality, and integration ability with other systems [6].

Considering these drawbacks, why do organizations choose to rely on their old systems?

This mentality arises from an awareness of the potential time, money, and risk involved in software upgrades. It can easily seem like the simpler path to remain using legacy systems. However, in time legacy system use will result in its own challenges. Namely...

This is perhaps the most-cited reason for using legacy systems. The upfront cost of upgrades, depending on your industry, can be a scary figure. However, what's important to consider is the costs you will eventually sink into your legacy system.

Is it still worth it to keep your legacy software running, when a new software system might solve many of the challenges you currently have to spend money on?

Following closely behind the upfront cost of upgrades, the time it takes to upgrade software is another initially prohibiting factor for many firms.

Consider: when upgrading, you will need to research what new solutions are available, negotiate with potential vendors, implement the solution, dedicate training time, plan out the transition process, and so on. These tasks can seem daunting for many companies considering upgrades. On the other hand, a great deal of time may be saved in your day-to-day operations with a new system.  Consider the productivity returns on your upfront investment of time.

So what is the reality of using legacy software?

Academic studies corroborate a fact that many companies have likely noticed themselves: maintenance costs make up the majority of total software cost. What companies may not know is just how much this is the reality for businesses as a whole, or the exact magnitude.

The reality is that the cost of maintaining and managing software and its evolution makes up over 90% of the total cost of the software [6]. With such high proportionate costs, this situation has been branded an outright "legacy crisis" by academia [7].

Older systems require particular skill sets that are increasingly becoming rare in today's growing workforce. As older employees, who have experience with the legacy systems retire, the ability of your organization to replace them with equally competent workers decreases.

This means that not only does your potential talent pool decrease, but also that the costs of hiring goes up: with fewer options in the hiring market, the ones who do possess the skills necessary are rare.

It's logical that older applications oftentimes just can't be integrated with newer software systems. If your firm finds itself in a position where it needs to use some newer tools, it’s an unfortunate truth that modern software can’t actually integrate with your legacy software.

Oftentimes, legacy systems limit both the ability and creativity of the systems' users.  Functionality and flexibility is just missing, which prevents an organization from being nimble enough to address changing market demands.

When your legacy systems can’t adapt or meet new needs of your employees to do their jobs, the likelihood of executing on innovative ideas or business concepts can only decrease.

The question for businesses with legacy software is just when do the benefits of upgrading outweigh the potential migration risks?