Technology Of The Future - 11 Ideas About to Transpire

When you look at how far we’ve come, it’s hard to imagine where the future of technology lies. The leaps made in the advancement of technology over the past 100 years is incredible and unmatched by any other time in human history. Yet, technology seems to continue to advance at an even faster rate. It wasn’t three decades ago that the Internet was considered a relatively new technology. Now even everyday devices, such as refrigerators, are connected to the Internet. It’s difficult to envision how far technology will advance within the next couple of decades. Considering the huge jump made in the first two decades of this new millennium, we can only imagine where we’ll be at by the end of this century.

How Advances In Technology Has Helped Improve Human Lives In General

For the most part, technology has always been advanced throughout human history as a way to benefit mankind, from the invention of the wheel to indoor plumbing to open heart surgery. You could argue that some technological advancements were made as a result of war -- and this is certainly true, but those wartime inventions also resulted in further advancements that actually benefited mankind. For example, the use of radar and penicillin both came out of the war. WWII was also responsible for nuclear weapons. Although these nuclear weapons were created for the purpose of massive human destruction, that discovery also happened to lead to nuclear power, which turned out to be incredibly beneficial to the world.

The following are just a few more examples of how advances in technology have greatly benefited our lives today:

There’s no reason to think that we’ve reached the limit of technology. New things are being discovered every day. Considering all of the things that were invented just in the last decade or so (VR glasses, tablets, cryptocurrency, self driving cars, drones, bionic eyes, and more), it’s not much of a reach to assume technology will continue advancing over the years and that human existence will continue to improve as a result.


The Future Of Technology And 11 Futuristic Predictions

Taking into consideration what we know about the technology available to us today, the following are 11 predictions about where technology is headed in the not so distant future:

Have you noticed how computers keep getting more and more powerful, yet the actual physical size of computers is growing smaller and smaller? Back when the first computers were built, they took up an entire room. Now our mobile phones are essentially pocket-sized computers. This trend will likely continue to the point where some computer chips may be replaced by atomic transistors within a decade or two.

Nanobots Will Plug Our Brains Straight Into The Cloud

Many scientists believe that it could soon be possible to upload consciousness to machines. Google’s Director of Engineering, Ray Kurzwell, believes that the human mind will be able to be uploaded to a computer within the next three decades. He believes that billions of nanobots could be sent through a human brain to scan every neural feature, thereby copying the knowledge, skills, and personality of a person onto a file that can be stored in the cloud. Essentially, this theory would result in digital immortality.

Drones are everywhere in this day and age. Drones are used for so many things, from delivering packages to inspecting construction. NASA has realized how useful they are and is currently designing drones for use in space as well. Speaking of how commonplace drones are, and considering the technology they use, we can assume that the flying car isn’t far behind. In fact, it’s not that it hasn’t been invented yet -- it has. It’s just that we need to find a safe way to implement them into everyday life. Flying cars just aren’t very practical at the moment, but that doesn’t mean that this won’t change in the future.

Artificial intelligence has advanced to the point where scientists are working on the idea of developing robot clones that could mirror the personality and consciousness of a deceased person. One funeral agency in Sweden has already begun asking for volunteers to provide permission to replicate the images of loved ones who have passed away.

Over the years, scientists have made huge advancements in mapping out the brain. In fact, neuroscientists may be on the brink of even being able to read people’s minds with the use of machines. They are doing this by attempting to translate electrical activity from the brain by decoding its brainwaves. While this might seem like a scary technological advancement, the purpose is to help individuals with dementia who have trouble relaying their thoughts into comprehensive speech or holding onto their thoughts long enough to be able to speak them.

Forest fires have recently been a serious problem, especially on the west coast. They cause massive amounts of property damage and endanger thousands of lives. They are also incredibly difficult to put out and require immense resources to do so. However, researchers have recently invented a sonic extinguisher that could put out fires by disrupting the air surrounding the fire using sound, thereby cutting off the oxygen needed to fuel the fire. This means that sonic extinguishers could be attached to drones and sent over a forest fire to help put it out using loud noises. Such an invention could help make it easier to put out forest fires before they do significant damage and could save the lives of countless firefighters and animals.

Artificial intelligence is already used regularly, although not quite in the ways that science fiction has predicted for decades. Presently, AI is used by companies like Amazon and Google to improve their shopping and searching experiences. However, AI currently functions on available information. In the future, many scientists believe that AI can advance to the point where it will be able to discover technological advancements on its own instead of only making decisions based on existing accessible data.

Space Tourism: A Week In Orbit

It hasn’t been that long since we sent a man to the moon. Traditionally, only astronauts could be launched into space, and they had to undergo years of rigorous training. Now, commercial companies, such as Elon Musk’s Space X, are signing up tourists (albeit very wealthy tourists) to take into space. Many futurists believe that these space tourists won’t even have to be launched into space at some point, but will be able to travel through the use of a space elevator; however, such an invention is at the very least half a century away.

We can already transplant almost every organ in the body, so the ability to transplant a human head might not be as far-fetched as it sounds. The challenge lies in the need to connect the head to the spinal cord, which is why it hasn’t been successfully done. Even then, there’s plenty of doubt as to whether it’s even possible. However, scientists are busy figuring out how they can start growth in spinal cord nerves. While many scientists are doubtful that this will lead to the ability to perform human head transplants, it could certainly lead to restoring the body function of spinal injury patients.

Pocket Supercomputers For Everyone

It’s estimated that roughly 80 percent of the adults in the world will have a smartphone that connects to the Internet by next year. Smartphones are already basically pocket-sized computers. The iPhone 6 has around 625 times more transistors than an Intel Pentium computer had back in 1995. Essentially, smartphones are already supercomputers. Soon, everyone will have a smartphone -- and they’ll be even smarter than they are now.

Looking at the past hundred years, there are several points where you could argue that the advancement of technology really kicked into high gear. However, many futurists believe that the New Age of Wonders has only begun -- meaning that 50 years from now, people will look back at this current time period as the time when technology advanced in leaps and bounds. It can be difficult to see that at the present, but considering that the existing technology, from our pocket supercomputers (also known as smartphones) to our self-driving cars, not to mention ideas like uploading our consciousness to the cloud (an idea that was unthinkable a few decades ago), the future might actually be right now.

How important It it to have an Idea of What Will transpire when it come to Technology of the Future?

You don’t have to be an expert on technology, simply having an idea of what the future might hold will allow you to keep an open mind and will make it easier to adapt to change. People who focus too much on the present tend to be more stubborn when it comes to new developments in technology and change, causing them to fall behind when new technology is widely adopted.


Should we be scared of the future or Embrace it with Open arms?

Being wary about what future has in store for us is natural. New technology can be used to benefit mankind, but it can also be used to our detriment. But as far as your business goes, you shouldn’t be too quick to reject new technology. Just take automation for example. When companies first began implementing automation, there was a huge fear that automation would replace human employees. While some jobs were certainly lost as a result of automation, it’s also true that many jobs were also created as a result of automation.  When it comes to new technology, don’t fear it, but don’t be too quick to adopt it either. Do your due diligence to decide if adopting a new technology will be beneficial to your needs first.


Is your business technology future-proofed? Find out with our quiz here! 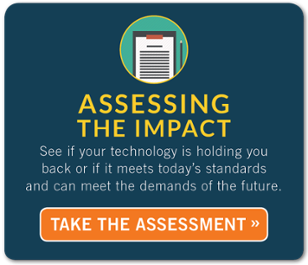